There is an old Zen story that goes;

A man was walking across a field when he heard a rustling in the tall grass beside him, and turned to see the hungry eyes of a large tiger staring at him. The man began to run, fear giving him greater speed and stamina than he knew he possessed. But always, just behind him, he could hear the easy breathing of the hungry tiger. Finally, the man stopped, not because his strength had failed but because he had come to the edge of a high cliff and could go no further.

"I can let the tiger eat me, or take my life in my own hands and jump." The man turned and saw the tiger slowly walking toward him, licking its mouth in anticipation. Resolved to take his own life, the man stepped to the edge of the cliff and bent his legs to jump, when he suddenly noticed a thick vine growing out of the side of the cliff, several feet from the top.

Carefully, he let himself drop down the cliff face, catching hold of the vine as he slid past, and thanked God when it was strong enough to support his weight. Hanging now, the man looked up and saw the tiger's eyes peering over the edge of the cliff. It roared down at him, then began to pace back and forth along the top of the cliff. For the first time, the man looked at the vine that had saved his life. It was thick enough for him to wrap his legs around, resting his arms, and long enough that he might be able to let himself far enough down to jump safely to the ground below.

And the moment he had this thought was the same moment that he saw the second tiger, pacing back and forth at the foot of the cliff, licking its mouth, and looking hungrily up at him. Well, thought the man, if my strength and the strength of the vine are great enough, perhaps I can outwait the tigers. Surely, they'll go someplace else to eat when they're hungry enough. And the man prepared to settle in for a long wait. His preparations halted quickly, however, when he heard a scurrying, scratching sound close to his own face. Glancing upwards, he saw two mice, one white and one black, emerge from a small hole in the cliff.

They made their way swiftly to the base of the vine, and began to gnaw through it with their small sharp teeth. There was nothing else he could do, a tiger above, a tiger below, and the vine that kept him from their jaws about to break. The man was closing his eyes to begin his prayers, when he noticed, a little to his right, a tiny patch of red color on the face of the cliff. He reached toward it precariously, pulled, and brought his hand back beneath his eyes.

There, in his palm, was a luscious, red strawberry. The man swiftly pressed the strawberry between his lips, onto his tongue, and hanging between those still visible tigers, he enjoyed the finest , juiciest, sweetest meal of his life.

There is another version of it ... the story is the same but at the end, the man cries out, "If there is a God in heaven, please help me now ... I will do anything you ask of me if I live".

The man stops for a minute and thinks, and then shouts out, "Is there anyone else up there!?!"

I recall this story.

The moral of it is to savour the present moment in time, not worry about the past or the future.
Top

What do ya call a fish with no eyes?
Top

bro neo wrote:What do ya call a fish with no eyes?

ex-l you ruined my perfectly silly joke with a perfectly legitimate answer! Astyanax fasciatus mexicanus is actually funnier then the punchline I had though. :)
Top

joel
ex-BK
Posts: 440
Joined: 01 May 2006
Affinity to the BKWSU: ex-BK
Please give a short description of your interest in joining this forum.: I was an active BK for 12 years. That was long ago. Now I am just a person.

bro neo wrote:What do ya call a fish with no eyes?

fsh! ... I never considered you to have such innocence in you bro neo.Ooops ... one for the XXX-BK Joke section.
Top

ex-l wrote:What do ya call a castrated stag

After a Dadi Janki class. "What the hell! I cant see, I cant see!"
Top

A DEADLY JOKE sent to me by a friend through email:

A taxi passenger tapped the driver on the shoulder to
ask him a question. The driver screamed, lost control of the
car, nearly hit a bus, went upon the footpath, and stopped
centimeters from a shop window.

For a second everything went quiet in the cab, then
the driver said, "Look mate, don't ever do that again. You
scared the daylights out of me!"

The passenger apologized and said, "I did not realize
that a little tap would scare you so much."

The driver replied, "Sorry, it's not really your
fault. Today is my first day as a cab driver - I've been
driving a van carrying dead bodies for the last 25 years."
Top

A problematic joke sent to me by a friend through email :

The Indian man said to the American,"You know my parents are forcing me to get married to this so called homely girl from a village whom I haven't even met once. We call this arranged marriage. I don't want to marry a woman whom I don't love ... I told them that openly and now have a hell lot of family problems."

The American said, "Talking about love marriages ... I'll tell you my story.

I married a widow much elder to me, whom I deeply loved and dated for 3 years.

After a couple of years, my Father fell deeply in love with my step-daughter who was quite younger to him and so my Father became my son-in-law and I became my Father's Father-in-law.

My daughter is my mother and my wife my grandmother.

More problems occurred when I had a son. My son is my Father's brother and so he is my uncle. Situations turned worse when my Father had a son. Now my Father's son i.e. my brother is my grandson.

With malice towards none,
Regards,
OGS,
Arjun
Top

Circulating in the WWW :

A man feared his wife wasn't hearing as well as she used to and he thought she might need a hearing aid. Not quite sure how to approach her, he called the family Doctor to discuss the problem. The Doctor told him there is a simple informal test the husband could perform to give the Doctor a better idea about her hearing loss.


Here's what you do," said the Doctor, "stand about 40 feet away from her and in a normal conversational speaking tone see if she hears you. If not, go to 30 feet, then 20 feet, and so on until you get a response."

That evening, the wife is in the kitchen cooking dinner, and he was in the den. He says to himself, "I am about 40 feet away, let's see what happens."

Then in a normal tone he asks, 'Honey, what's for dinner?". No response.

So the husband moves to closer to the kitchen, about 30 feet from his wife and repeats, "Honey, what's for dinner?". Still no response.

Next he moves into the dining room where he is about 20 feet from hiswife and asks, Honey, what's for dinner?". Again he gets no response so,

He walks up to the kitchen door, about 10 feet away. "Honey, what's for dinner?". Again there is no response.

So he walks right up behind her. "Honey, what's for dinner?"

Moral of the story:

The problem may not be with the other one as we always think, could be very much within us!
Top

paulkershaw
ex-BK
Posts: 684
Joined: 11 Dec 2006
Affinity to the BKWSU: ex-BKWSU
Please give a short description of your interest in joining this forum.: I am an ex-teacher and member of the BKWSU and my interest lies in assisting those who request support on any level I can.
Location: South Africa

See how happy the monks are in the background !! "To give is to receive ..." 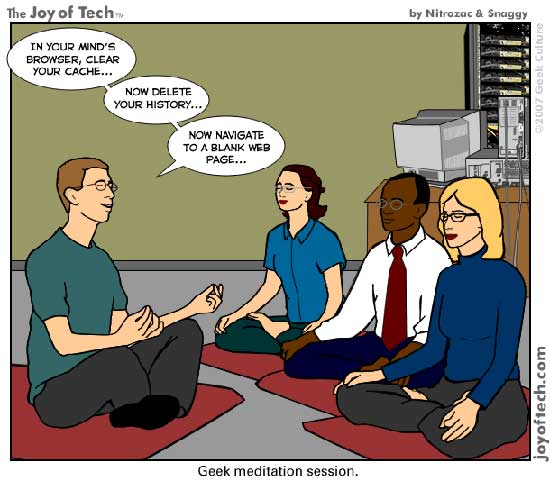 I think that for introducing politeness between conversation posts in this forum we shall now use the opening phrase "Web Shanti" in each post.

So Web Shanti everyone. :P
Top

Users browsing this forum: No registered users and 2 guests